Sea turtle volunteering in Greece is the best way to conserve the most important nesting beaches for loggerhead sea turtles in Europe...

Sea turtle volunteering in Greece is the best way to conserve the most important nesting beaches for loggerhead sea turtles in Europe. Each year the Mediterranean country draws thousands of sea turtles to its shores. Be part of the local turtle conservation work to protect one of the oldest creatures on Earth.

While volunteering for sea turtle conservation in Greece, you will go on beach patrols, care for injured sea turtles, protect eggs from poachers and release baby sea turtles back into the ocean. Come and enjoy the mystical, windswept islands, ancient temples, and delicious food of this country and volunteer with sea turtles in Greece! 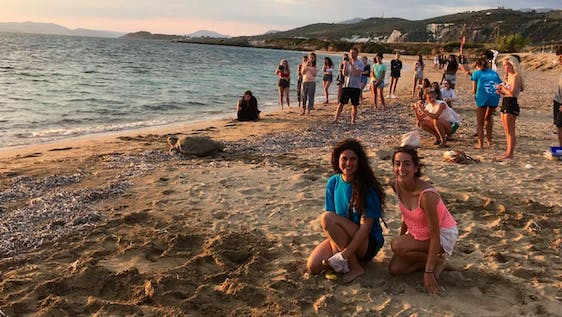 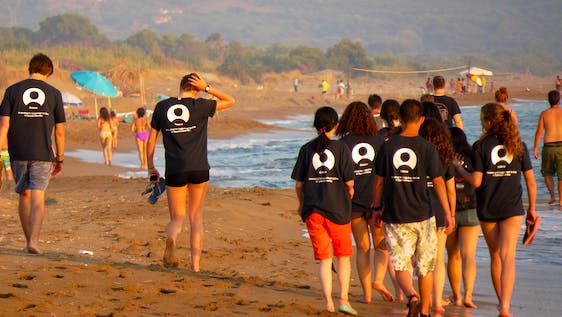 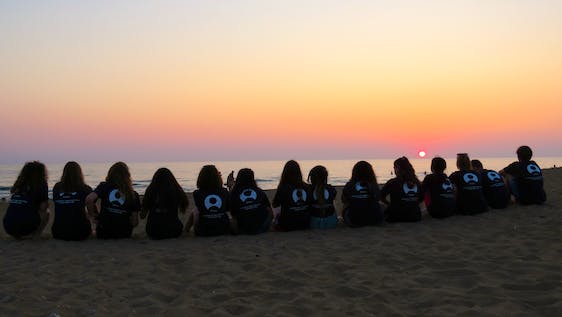 Work on critical turtle conservation initiatives in the ancient beachside town of Kyparissia Bay in Greece. 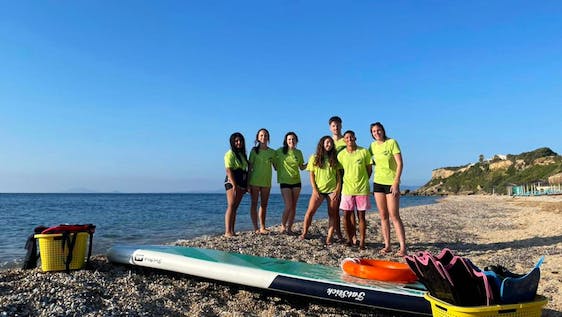 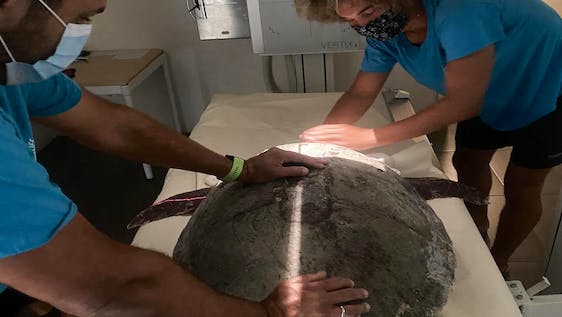 Conservation of Sea Turtles and Their Habitat

Together with the project coordinators you will live an incredible natural experience in a paradisiacal destination without having to travel many hours by plane.

Alluring islands, ancient temples, and delicious food – that’s what Greece is famous for. But did you know that each year the Mediterranean country draws thousands of sea turtles to its shores for nesting?

Loggerhead, leatherback, hawksbill, and green sea turtle have all been spotted in Greek seas. However, the marvelous loggerhead turtle is Greece’s most frequent visitor. Every nesting season, it travels to its favorite beaches on the island of Zakynthos to lay hundreds of eggs.

Come and enjoy the mystical, windswept islands of Greece and help a local project to conserve the most important beaches to nest for loggerhead sea turtles in Europe.

Marine turtles already roam our planet’s oceans for millions of years. Today, many of the seven existing species are under threat and their population numbers are dwindling. The ocean dwellers can be found in warm and temperate bodies of water all over the world, often migrating thousands of miles between feeding and nesting grounds.

In Greece, four marine turtle species have been sighted so far: loggerhead, leatherback, hawksbill, and green sea turtle. The only species that has been reported to nest on Greek shores is the loggerhead turtle.

This turtle is known for its strong jaw muscles that can easily crunch prey with hard shells, such as crabs, clams, and mussels. The loggerhead turtle is the most common turtle in Greek seas, that nests on the country's insular sandy beaches. Although strictly protected by international and local law, this species’ population size is rapidly declining and therefore listed as vulnerable by experts.

Leatherbacks are the largest of all living turtles in the world. Individuals measuring over 160 cm and weighing up to 680 kg have been recorded. Since its population has almost been cut in half over the past nine decades, leatherback turtles are listed as vulnerable by IUCN. In Greece, the swift giant can be seen infrequently gliding through the crystal clear waters looking for jellyfish, squid or other marine creatures to devour.

With a population loss of over 60% over the last three generations, green sea turtles are an endangered species. There is no evidence for any green sea turtle to nest in Greece, but from time to time these huge herbivores can be observed nibbling on seagrass and algae in Greek waters.

The hawksbill sea turtle is a critically endangered species known for its colorful, patterned shell. Mainly feeding on sponges on coral reefs, this marine animal is primarily residing in tropical seas, but can occasionally be spotted in the Mediterranean territory.

Why are Sea Turtles in Greece under threat?

Sea turtles have been paddling around in our planet’s oceans for a very long time. However, never have they faced as many threats as today. Only about one in a thousand hatchlings survives natural hazards and makes it to adulthood. Further threats caused by humans make a sea turtle’s life even more dangerous. Loggerhead turtles are the only sea turtles to nest in Greece. However, other turtle species that are only passing through are also under threat from human impacts. Let’s take a look at the most important factors threatening sea turtles in Greece:

Surrounded by the Aegean, the Ionian, and the Mediterranean Sea it’s not a surprise that Greece is prominent for its fishing culture. Fish is one of the main ingredients of traditional Greek cuisine and tourists flock to charming fishing villages offering delicious seafood every day. From sardines to anchovies and mackerel, the Greek waters are abundant with different types of fish. The downside of the country's love for fish? Marine turtles often get stuck in fishing gear resulting in injuries or deaths.

In areas with high density of human settlements, pollution also plays a big role in the health of marine animals. Sea turtles often get entangled in trash floating in the sea or ingest plastics that look like jellyfish.

With over 30 million tourists visiting each year, Greece is a true tourist hotspot. Increasing numbers of tourists mean more coastal development to supply the visitors with the infrastructure needed. Feeding habitats and nesting beaches are under threat from tourist masses and construction endeavors. Furthermore, artificial lights can cause turtles to lose orientation and not find the way to their nest anymore.

Wildfires can cause significant damage to turtle nesting sites. When the surrounding vegetation is destroyed, beaches become vulnerable to erosion, which makes the beaches unsafe for the marine animal's nests.

The idyllic Sekania beach on the island of Zakynthos is the most important nesting site for loggerhead turtles in the Mediterranean. Each year, females build 500-1000 nests in the soft, golden sand to lay their eggs. Protecting this site has become a priority for international and local organizations.

In 1999 the National Marine Park of Zakynthos was established, putting Sekania under full legal protection. Today, access to the beach is only allowed for scientific research. The World Wildlife Fund works together with local projects such as ARCHELON, the Sea Turtle Protection Society of Greece and MEDASSET, the Mediterranean Association to Save the Sea Turtles to keep the nesting area protected.

Beach cleanups, beach monitoring, and prevention of illegal activities such as landfill disposal are part of their work. Furthermore, water tanks have been installed to extinguish arising wildfires quickly and erosion control measures have been put into place.

Where can I work with sea turtles in Greece?

Although Zakynthos is the most famous island for sea turtle conservation projects in Greece, other parts of the country such as the peninsula Peloponnese and the island Crete also offer volunteer activities protecting nesting beaches. Sea turtle rescue centers can also be found throughout the country. These centers take care of animals injured by fishing nets, boats, trash etc.

Since Greece is a rather small country and the tourist infrastructure is highly developed, you can easily travel around from wherever you are stationed as a volunteer and explore the other beautiful parts of this fascinating country.

How can I help to save sea turtles in Greece?

Volunteering for a sea turtle conservation project in Greece is the first step towards saving these magnificent beings. The work is usually a mix of research and outdoor activities. Expect to have a lot of fun and learn new skills.

Your tasks as a sea turtle volunteer in Greece

Working with turtles is a unique and very rewarding experience. The volunteer work might differ depending on whether you’re working to protect a nesting site or if you’re volunteering at a sea turtle rescue center in Greece.

The timing of your volunteering trip also matters. Should you come to Greece between May and August you will be there for nesting season and most of your volunteer tasks will revolve around protecting the turtles and their nests. If you arrive between July and October you will be there for the hatchling season, which means you will help the baby turtles journey into the ocean safely.

These are some of the volunteer tasks you can help the local projects with:

Spending your vacation in Greece and help out with a good cause will be nothing short of amazing. Need some convincing? Check out these perks you’ll be able to enjoy while volunteering for sea turtle conservation in Greece:

Visit this ancient European country and protect one of the most ancient animals still roaming this planet at the same time! Volunteer for sea turtle conservation projects on one of the greek islands and support important research and conversation work. Your volunteer journey abroad awaits you!